It was definitely Christmas with a Gypsy twist tonight at Blue Frog Studios in White Rock British Columbia as Van Django took to the stage. With an obvious nod to the great Django Reinhardt, Van Django took us on a wonderful Yuletide musical journey. Van Django is an acoustic string ensemble made up of four of Canada’s most talented and eclectic musicians; violinist Cameron Wilson, guitarist Budge Schachte, guitarist/cellist Finn Manniche and bassist Brent Gubbels, with the wonderful L.J. Mounteney on vocals. Their Christmas CD, Cool Yule features all the favourites, including Skating, from the Charlie Brown Christmas show, It’s Beginning to Look A Lot Like Christmas, I’ll Be Home for Christmas, Sleigh Ride, ‘Zat You Santa Claus and In the Bleak Midwinter — the latter in a Celtic style. Even a spiced up version of Let it Snow, as a slow Argentine tango. The night finished with the traditional Silent Night. It was a great night, and a great kickoff to the holiday season. 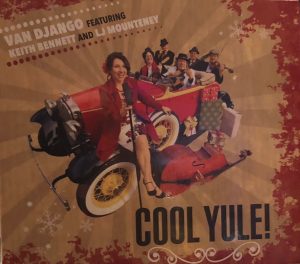