It was an amazing night of music at Blue Frog Studios in White Rock, British Columbia, Canada tonight! Three of the most sought after Jazz musicians in the country on the stage at Blue Frog, much to the delight of the sold out crowd. The amazing Bill Coon on guitar, the wonderful Miles Black at the piano, and hometown girl, Jodi Proznick on bass, threw out all the musical charts and played straight improvisational jazz all night long. What a treat to have these world class musicians together on the Blue Frog stage. It was one of those nights that you wished would go on and on and on. The trio is known as Triology, and mixed some old standards, and added a jazzy twist to some Christmas classics. It was quite a night. 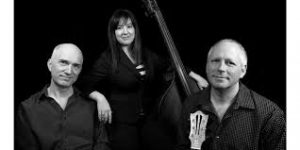