Last night at the Blue Frog Studios in White Rock B.C. it was the annual Christmas Dance with the Mud Bay Blues Band. This was the wrap-up to another successful year at the Blue Frog, and the event was MC’d by Dave Chesney. Throughout the year, Dave, Casey White and I share the MC duties at the Blue Frog, and it just happened that we were all in attendance last night…so…Kelly Breaks, Blue Frog’s owner, asked the three of us to get up on stage. It’s the first time we’ve all been on stage together! Thanks to Mud Bay Slim and the band for sharing the spotlight with us. It was another great year at the Blue Frog. 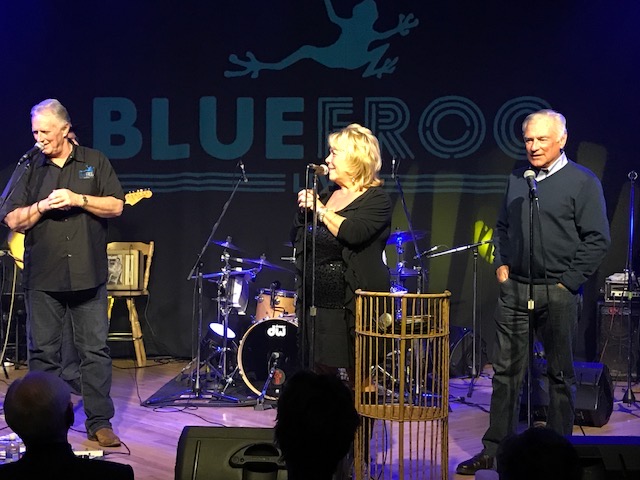 It was a cold wintery night last night, but the David Vest band warmed up the crowd at the Blue Frog Studios in White Rock British Columbia. It was an entertaining mix of Blues, Boogie Woogie, Rock and Roll and Soul. Vest, a veteran musician who was born in Alabama, and in the early days played road houses and honky tonks, now makes Victoria British Columbia home. He’s played on the bill with all the greats, from Big Joe Turner to Roy Orbison. He and his band featured a number songs from his soon to be released CD, and had the crowd singing along. David Vest is a past winner of the Maple Blues Award for piano/keyboard player of the year. Another great night at the Blue Frog! 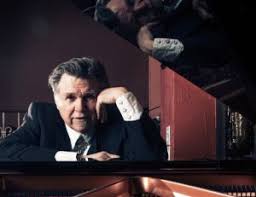 The Queen Elizabeth Theatre in Vancouver was rocking last night!  Local Abba Tribute Band, Abra Cadabra opened for Boney M. and had the crowd on its feet, dancing and singing along to all the great ABBA hits.
Abra Cadabra has been touring the world for over 15 years now, bringing the magic and the music of the Swedish Super Group.   Malasia, Singapore, Mexico, Kuala Lumpur, the United States and Canada to name a few stops along the way.
And, this powerhouse group will be performing to a Sold Out crowd at Blue Frog Studios in White Rock, B.C. in October.
Check out their website.  http://mooncoinproductions.com/entertainment/abra-cadabra 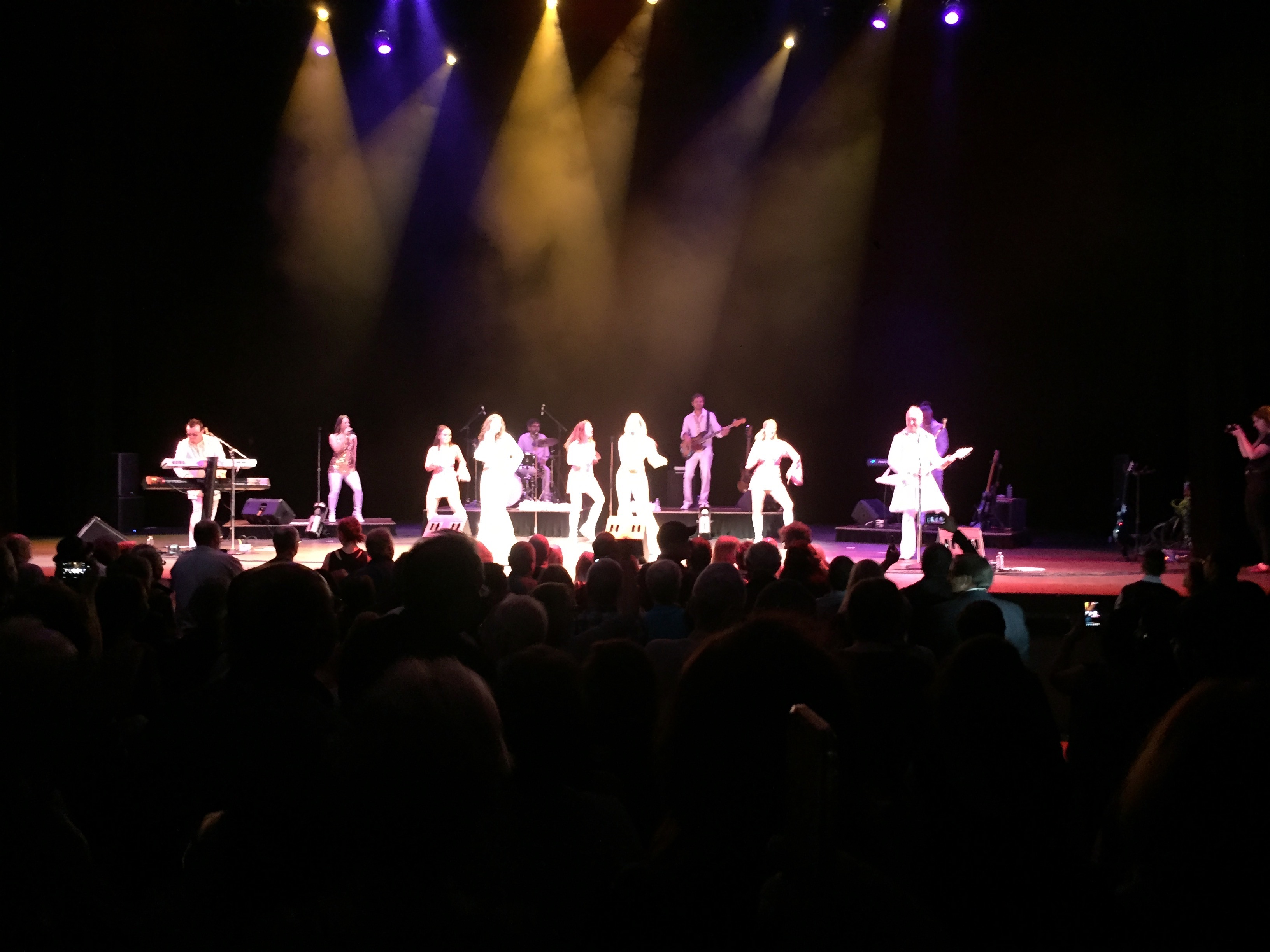 It’s the concert Blue Frog fans have been waiting for all year!  Kal David and Lauri Bono returned to Blue Frog Studios in White Rock B.C. for 4 sold out shows.  Kal and Lauri have just been inducted into the  U.S. National Blues Hall of Fame, and the Connecticut Blues Hall of Fame, and thrilled the patrons at Blue Frog.  Backed by Jeff Lantz on keyboards, J.T. Platt on sax, and John McCreath behind the drum kit, it was a night to remember!  Kal played lead guitar for John Mayall and the Bluesbreakers for a number of years, and Mayall said of Kal, “I’m happy to count Kal David as one of the best…what a talent”  High praise! 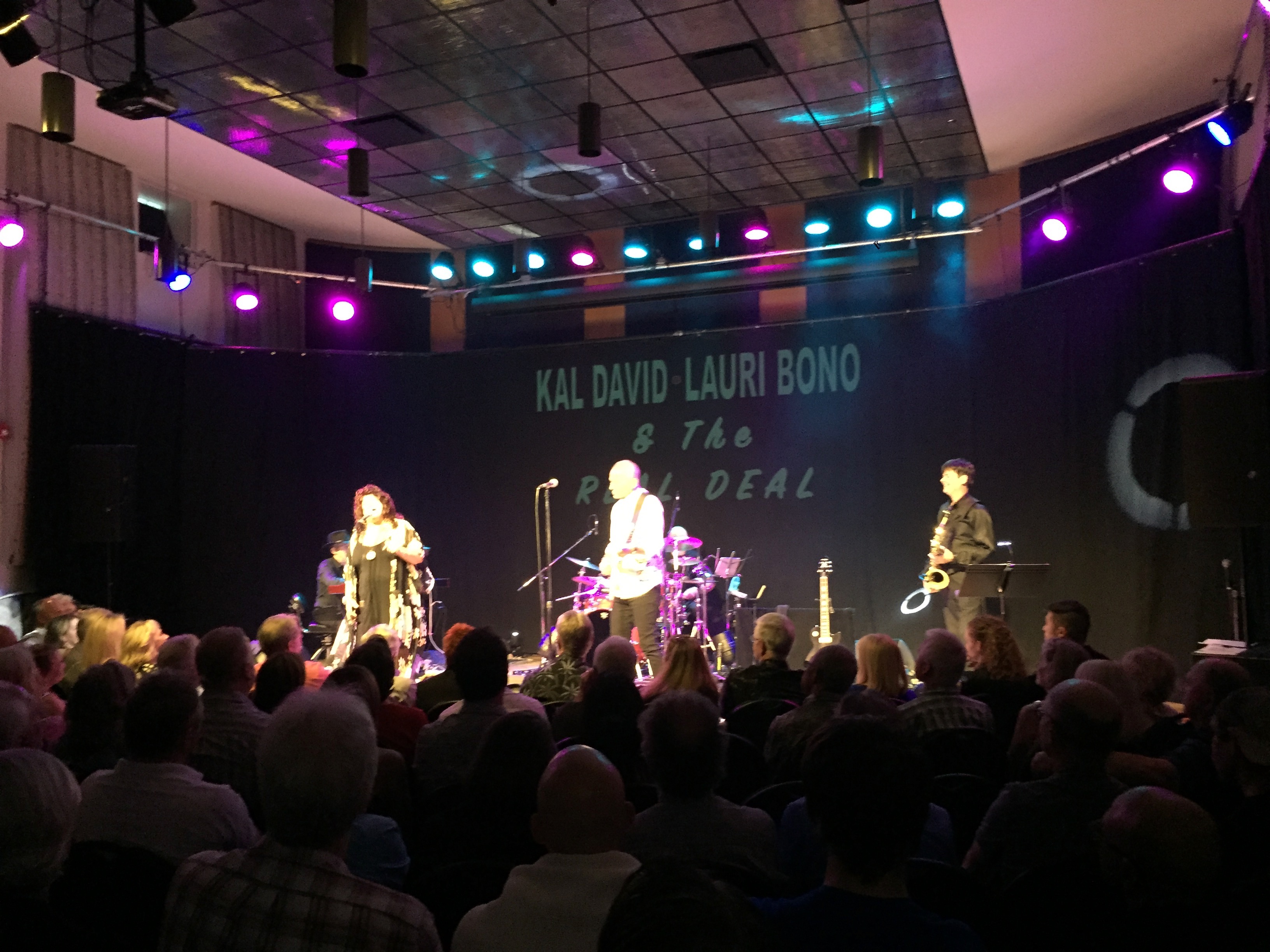 I was Mc’ing at the Blue Frog last night, introducing Angel Forrest.  What a talent!  An amazing display of raw, powerful blues that you probably haven’t heard since the days of Janis Joplin.  Angel is a 4 time winner of Female Vocalist of the Year, at the Maple Blues Awards, and was last year’s winner of Producer and Songwriter of the year.  Her latest album has an interesting theme.  The album is called Angel’s 11, and Angel composed 11 original songs, and each song featured one of her 11 favourite guitar players!  Google her for more info on that!  It was a great night for sure, and she says she’s going to come back!  Once again the Blue Frog proved to be an excellent venue and gave the crowd a very intimate setting for an outstanding concert. 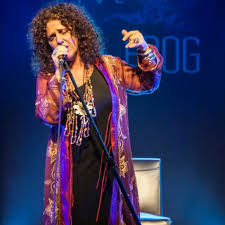 The Blue Frog Studios in White Rock B.C. kicked off the 5th Annual Fall Festival of the Arts in great style tonight.  White Rock’s Mayor, Wayne Baldwin, officially got things going proclaiming the 2 month long festival underway!  Then time for music from the Gabriel Palatchi Trio.  Once again, Kelly, Juanita and the Blue Frog hit it out of the park.  The capacity crowd was entertained by this Ultra-Talented Threesome!  It was a combination of Funk, Jazz, Latin Jazz, and Samba.  Outstanding musicianship had the crowd spellbound!  They have one more date on their tour and then it’s over until next Summer.  It’s another “Gotta-See” group. 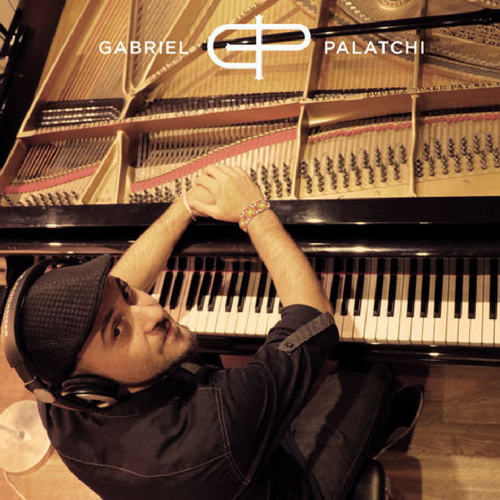 I was fortunate to mc the Jane Bunnett and Maqueque show tonight at the Blue Frog.  They brought the high energy of Cuban music to the stage.  An all star band backed Jane in one of the final performances of their current tour.  It was outstanding!  A standing ovation brought on an encore and left the audience wanting more!  You can see why this group is a multi Juno award winner and a Grammy nominee.  The Boston Globe said, ““Jane Bunnett and Maqueque… utterly shatters the glass ceiling of Afro Cuban Jazz”   We were so fortunate to have them In White Rock at the Blue Frog Studios. 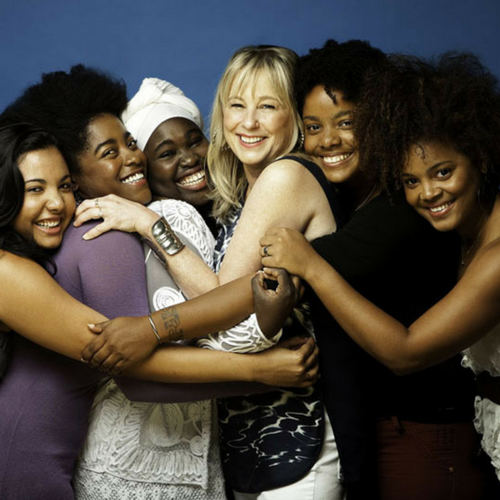 Byrd Dawg took over the Blue Frog Studios in White Rock B.C. once again, with their tribute to the Everly Brothers and Simon and Garfunkel.  Joel Dietrich and Wayne Rempel, backed by the Vintage Electric band took to the Blue Frog stage for 2 shows tonight.  After a Summer time off, I was back mc’ing the show, and what a great show it was!  The boys thrilled the audience with their harmonies, and emphasized that they were paying tribute to the music, not trying to imitate the 2 duos.  All the great hits were there, and both crowds had a great time singing along to all the classic hits. 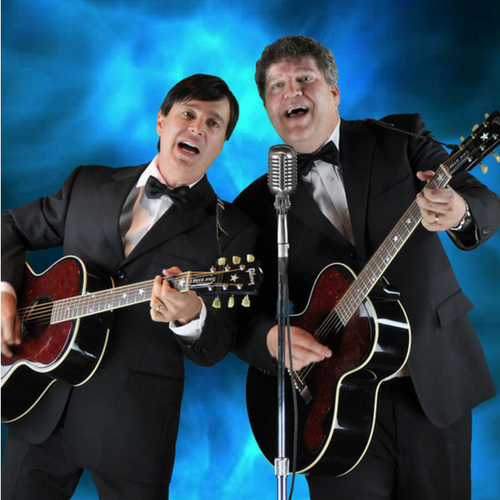 It was another fabulous night at the Blue Frog Studios in White Rock B.C. tonight.  Dutch performer, Mr. Boogie Woogie hit it out of the park with his high energy show.  Backed by Rob Montgomery’s band, Mr. Boogie Woogie aka Erik Jan Overbeek, put on an amazing display of how you play Boogie Woogie!!  It was a sold out show, and everyone left with a smile!  What a night! 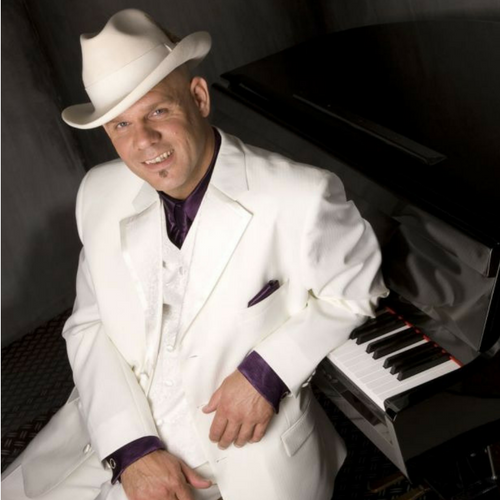 David Gogo kicked off the Brews and Blues weekend at the Blue Frog tonight with a sold out show!  It was Blues, and some Rock and Roll at its finest.  David was named the 2017 Maple Blues Awards, Guitarist of the year!  He’s played along side Johnny Winter, Albert Collins and Bo Diddly.  He’s opened for George Thorogood, ZZ Top, Buddy Guy and B.B. King.  And he didn’t disappoint tonight! Another great night at the Blue Frog.

David, seen here on the left with drummer Shawn Soucy and Evan on Bass…. 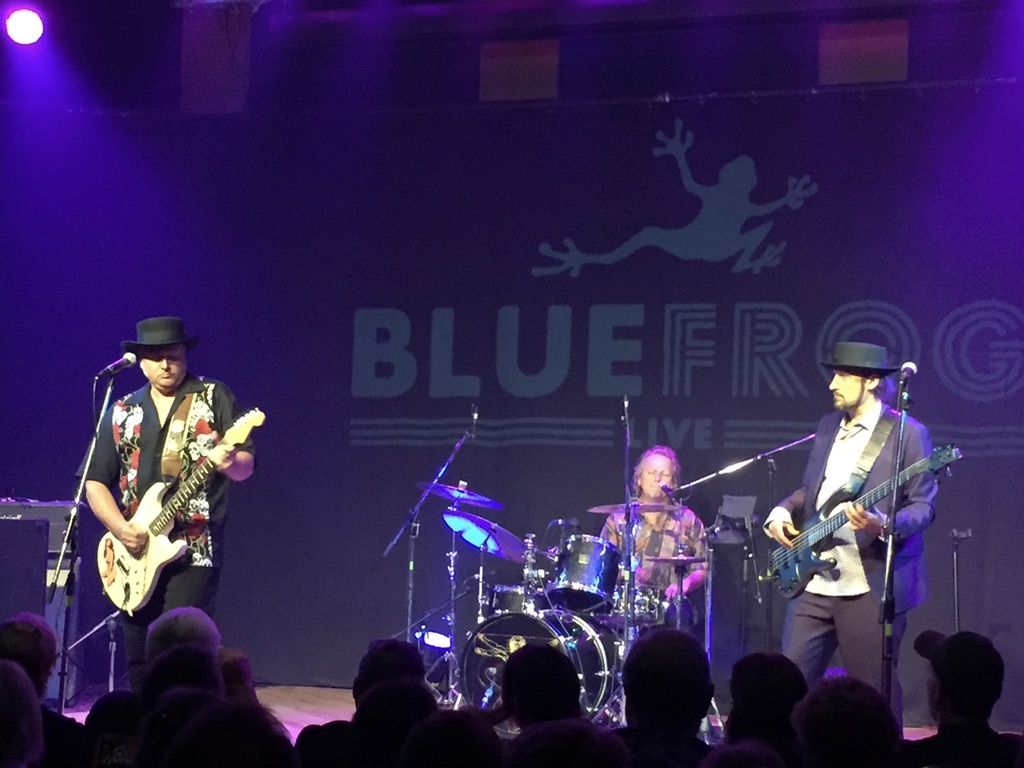