I had the great privilege to MC the Vancouver Police Pipe Band’s Robbie Burns Supper on Saturday night. Not only was it the celebration of Scottish Poet Robbie Burns, but it was the first official event of the year for the band that is celebrating its 100th Anniversary. It was a sold out crowd that was treated to Scottish dance and music, and an amazing concert by the Pipe Band. Jim Chu, the Vancouver Police Department’s Chief Constable and his wife were on hand to join in the celebration. It was a great night, and as a bonus I got to catch up with an old school friend, Bruce Eburne, who has been the band’s Drum Major for over 30 years! If you get a chance to see and hear the band perform….do it. 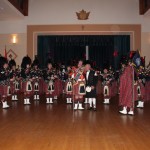 Me, with the Vancouver Police Pipe Band, celebrating its 100th Anniversary