The R&B All Stars did it again. Blew the roof off Blue Frog Studios in White Rock British Columbia, Canada! What a series of sold out shows this weekend. Solid performances every night. This year the R&B All Stars celebrate its 40th year on the Vancouver music scene. And to strengthen the band, 3 new members have been added to the All Star lineup, Bill Sample on keys, Tim Porter on lead guitar and vocals, and Nathan Aswell teaming up with Joani Bye on lead vocals. Once again have a winning combination when you add these new members to the already talented cast of players.. The Blue Frog audiences responded with standing ovations for every show. 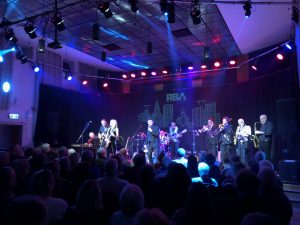