It was a Kalimba weekend at Blue Frog Studios in White Rock, British Columbia, Canada. This past Summer, the high energy group had 3500 people dancing in the streets during the Concerts for the Pier series. We brought the show inside this weekend, and for the late show on Saturday, took away all the seats and created a dance party that rocked into the night. Kalimba celebrates the music and spirit of Earth, Wind and Fire, and because we’re into the season, threw in some Christmas tunes with a funky beat. Kalimba plays all up and down the West Coast, and we were fortunate to have the band make a stop in White Rock. 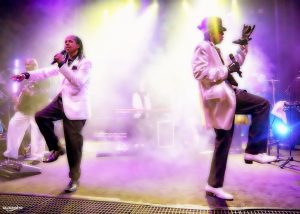