At Blue Frog Studios in White Rock, British Columbia, Canada, Dreams, the ultimate tribute to Fleetwood Mac, had them standing, dancing and singing along, to finish up 5 sold out shows this weekend. The crowd loved every minute as Dreams went through a set list of the best of the best of Fleetwood Mac. What a talented group! Ray Doucet on bass, Mario Parente guitar and vocals, Todd McGarvey drums, Rachael Chatoor Keyboard and vocals, Tracy Masson vocals, and Bob Van Velzen vocals and Keys. They rocked Blue Frog once again! Don’t miss them, as they tour the country this year. 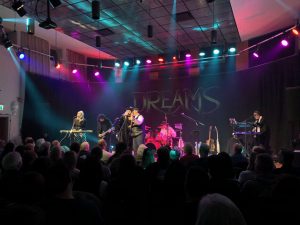 Friday and Saturday night Chicago came to White Rock British Columbia! Well, musically speaking it did. West Coast Chicago is a group of musicians who share a mutual admiration of the band, Chicago. Paul Clarke, the keyboard player, formed the West Coast band that is dedicated its performance, to recreating the sound, the energy and intensity of all the big hits of Chicago. Paul, who has in depth knowledge of the original band tells some of the stories and origins of the original hits. West Coast Chicago kept Blue Frog Studios rocking to sold out crowds both Friday and Saturday night. 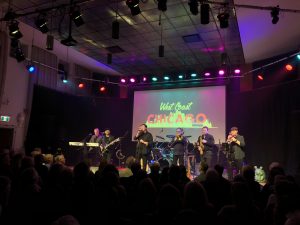 Another sold out crowd at Blue Frog Studios in White Rock, British Columbia, Canada tonight, to see the guitar virtuoso Johnny A.
who has played prestigious festivals like Eric Clapton’s Crossroads, the Montreal Jazz Festival, and Tokyo’s Fuji Rock Festival.
He’s a Boston Hall of Fame inductee, and a Gibson, Epiphone signature guitarist. Johnny is on a once a year west coast tour, playing only 10 dates, and it’s his first visit to Vancouver, and White Rock, and the crowd was knocked out at his amazing talent. Utilizing guitar looping, Johnny took the crowd on an amazing trip through an 80 minute musical voyage that was truly mind boggling! He says he wants to come back next year, and if he does, it’s a show you don’t want to miss. 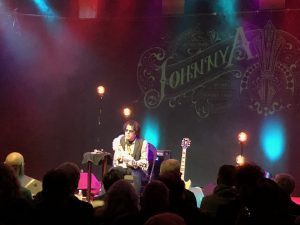 Here’s a strange one for Blue Frog Studios in White Rock B.C. The 2 sold out Randy Hansen tribute to Jimi Hendrix shows had to be cancelled tonight. Here’s the notification from Blue Frog. “We have just been informed that Randy Hansen has been rushed to the hospital with appendicitis. We regret to inform you that Randy’s concert at Blue Frog Studios on Saturday Jan.11, 2020 has been cancelled. Your ticket will be refunded asap to the credit card that was used to purchase your tickets. We are making arrangements with Randy’s manager to re-book for a future date, but in the meantime we wish Randy a speedy recovery.” So, Randy/Jimi fans will have to wait for the re-booking. 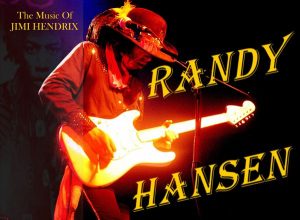