Good old Country Music took over the stage of Blue Frog Studios, in White Rock, British Columbia, Canada on Friday night. Kenny Hess, Hall of Famer and Country Music singer and songwriter entertained the sellout crowd at Blue Frog, with songs and stories of the good old days of Country Music. Music from George Jones, Merle Haggard, Buck Owens, Johnny Cash….songs from the entertainers you no longer hear on the new Country radio stations. It was a wonderful trip down memory lane for the audience and for me. Kenny and I met more years ago than we care to remember. Kenny has a number of awards on his mantle, and has penned hundreds of songs over the years. And the stories he can tell!! He kept the crowd spell bound. Kenny is the man behind the Rockin’ River Music Fest. in Merritt every B.C. Day holiday weekend, and you can catch him there.

Fans of the band “HEART” came out tonight for 2 sold out shows at Blue Frog Studios in White Rock, British Columbia, Canada for the band Barracuda, celebrating the music of HEART. Roger Fisher, guitarist and founding member of HEART has officially endorsed Barracuda, for its tribute show, which is very high praise. The second sold out show tonight was streaming live around the world, something that is gaining in popularity with Blue Frog regulars. It was a great night for HEART fans at Blue Frog tonight! 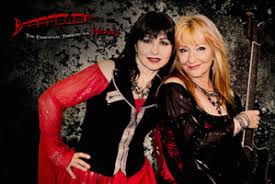