I had the pleasure of MC’ing another great event at the Blue Frog Studios in White Rock B.C. tonight.  It was the 40th Anniversary Reunion of Valdy and The Hometown Band.  It was a magical night as Valdy was together again with the Hometown Band, after 40 years!  Claire Lawrence, Shari Ulrich, Geoff Eyre, Norm McPherson, Michael Creber and Connie LeBeau, took the stage with Valdy, and put on a wonderful performance!  2 sold out shows at the Blue Frog!  A great night! 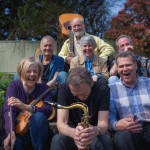