I had the pleasure of MC’ing at the Blue Frog Studios in White Rock B.C.  last night, and introduced one of the greatest bands on the planet….The R&B Allstars.  What a powerhouse show!  How can you miss with an 11member band, (12 last night) with a 6 piece horn section.  The group broke up for a few years, but in 2013 got back together with eight original members and three new additions. Powerful vocals include Dave Steele (new), Joanie Bye, Kirsten Nash and Al Lynch. The original rhythm section of Rick Hill (drums), Russ Marsland (guitar) Al Davidson (keys) are now joined with Billy Mendoza (bass). The original horn section of Kirsten Nash (tenor), Colin Weinmaster (trombone), John Pearson (baritone sax), Tom Keenlyside (sax, flute),  Al Lynch (trumpet) have added the smoking talents of Steve Hilliam.  They blew the roof off the Blue Frog, with 2 sold out shows! 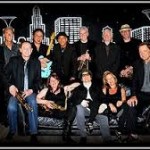 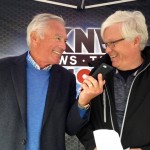 I was working with my friends at Fortis B.C. and CKNW Radio yesterday, this time at Gardenworks in Burnaby.  It was a radio remote broadcast designed to bring attention and awareness to a  program known as “Call before you dig” and “BC One Call.”  With slogans like “Know what’s below before you dig” and “Never guess where it’s safe to dig”  BC One Call will tell you where utilities are buried on your property.  All part of the Public Safety Program at Fortis B.C.

I did a radio remote broadcast today for radio station CKNW in Vancouver.  The Mr. Lube, Tournament for Life golf tournament, was held at the Point Grey Golf and Country Club.  Money raised went to the VGH & UBC Hospital Foundation, for the Vancouver Prostate Centre at the Vancouver General Hospital.   Last year, the event raised over half a million dollars, and over the past 20 years, has raised over $3.2 million, to advance Prostate Cancer research and care.  Vancouver is very fortunate to have a world class facility dedicated to both advancing research and finding the best treatments for cancer patients.  The Vancouver Prostate Centre at VGH is one of the top 3 prostate centres in the world.  A big thank you to the sponsors and participants at  the annual Golf Tournament.